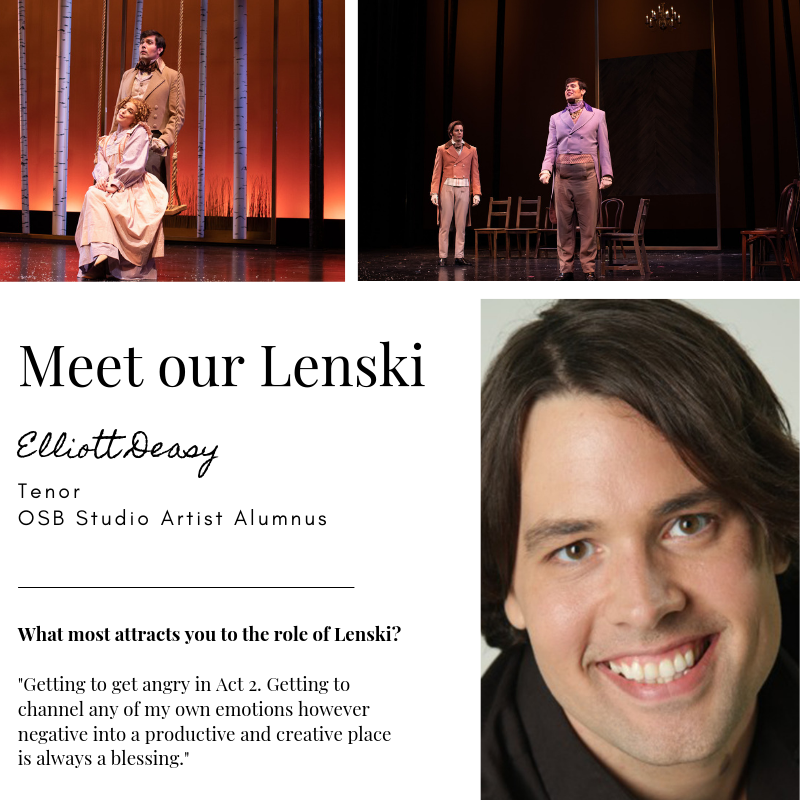 What’s the best love story in opera?
Der Rosenkavalier. For some reason that love story resonates with me. I see new love sparking, a lustful old man, and a woman showing what grace can truly be. Things are complicated and effected by outside influences and that feels the most real.

What language is your favorite to sing in?
For better or worse I love singing in English. Especially singing for English speaking audiences in English. The response is much more immediate. Feels like the disconnect is removed when they actually know what I’m saying.

Dream Role: Singing Lenski really is a dream come true. I’ve wanted to sing it for years. But if I had to choose another it may well be Tom Rakewell. I’m getting a little old for it but I love Stravinski’s musical language and love his character progression into madness.

How much Russian did you know before OSB’s Eugene Onegin started?
I knew little more than three words and a passing understanding of Cyrillic.

Favorite Recording of Eugene Onegin (or favorite mezzo soprano who sang it)?
The maestro gave me a 1951 Bolshoi recording with Kazlovski as Lenski and it truly has a freedom I’ve never heard before in this opera.

What tune from the opera gets stuck in your head the most?
The Act 1 peasant chorus. Vaynu, vaynu, vaynu.

What most attracts you to the role of Lenski:
Getting to get angry in Act 2. Getting to channel any of my own emotions however negative into a productive and creative place is always a blessing.

If you could give love advice to your character, what would it be?
Let it go.

Who would win in a duel: You or Lee Poulis who plays Onegin?
Lee hands down. I hate guns and refuse to handle any but a prop.

Best part of being in SB?
Getting the hell out of Chicago. I escaped a polar vortex and get to see the sun over the ocean every morning I wake up.