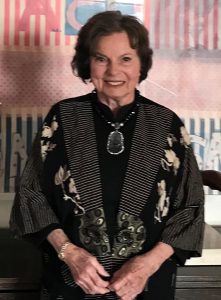 All Bravo Society members share a deep personal connection with opera. How they arrived at the decision to leave their own opera legacy is unique. We asked OSB Board member, Judy Smith, to share her story.

Classical music has long been a passion for Judy Smith. She joined the Opera SB Board in 2005 and continues to serve on its Governance Committee. A past board member of the Music Academy of the West, she also currently serves on CAMA’s Board of Directors.

Judy’s interest in music was sparked when she began playing the piano at five. She was determined to continue playing when she attended Stanford University. When she was told there would be no practice room available unless she changed her minor to Music, she did so.

As a young girl growing up in Los Angeles, Judy was instantly hooked by the San Francisco Opera’s touring production of Rigoletto there. One of the most exciting operas she remembers was at the Shrine Auditorium in Los Angeles (before Los Angeles Opera was established) when the young Joan Sutherland with her flaming red hair sang Lucia with seven curtain calls. Thirty years later Judy met Sutherland in San Francisco where the diva was performing at a retirement event for her good friend, Marilyn Horne. She took pleasure in reminding Sutherland of her abundant curtain calls for that early, unforgettable performance of Lucia.

As an interior designer, the sets and costumes of opera continue to inspire Judy along with the music and artists. She remarked “I love to see something more from every opera I attend.” Judy decided to join Opera Santa Barbara’s Bravo Society by including it in her estate plan because, as she said, “It’s a special thing I can do for Opera Santa Barbara’s future.”

You can join Judy and other passionate music lovers who want to ensure that live opera flourishes in Santa Barbara for future generations. Become a member of Opera Santa Barbara’s Bravo Society by including the company in your estate plan or with an endowment gift today. Contact Nina Dunbar, Director of Development at 805 898-3890, [email protected] for further details, or visit our website’s Legacy Giving page.