Opera Volunteers Get Behind the Curtain for Tosca

On September 14, a dozen Opera Ambassadors (aka OSB volunteers) quite literally enjoyed a rare peek behind the curtain, into the epicenter of the opera’s Costume Shop in the Paseo Nuevo mall in downtown Santa Barbara. Company costume designer Stacie Logue shared the backstory of what is involved in the process of providing costumes for the entire cast of any given opera with a particular focus on the historic costumes for Tosca.

Following a welcome by Nina Dunbar, Director of Development, Stacie described how she discusses the initial concept for the opera with the director, in this case, Layna Chianakas. This determines the era in which the opera will be set and the general look and feel of the production. She then researches possible sources for existing costumes, surveys the OSB inventory, and sets about finding garments that will outfit everyone from principals to the singers in the children’s chorus, and when necessary, creating costumes from scratch. Behind a curtain that separates the work space from a fitting area, Stacie and her assistant Jane Hatfield, spend countless hours “retrofitting” existing garments or building new ones that will be part of the magic created onstage. Guests previewed the fine craftsmanship of the gowns to be worn by soprano Eleni Calenos in her title role of Tosca, along with several soldiers’ uniforms and choir gowns. 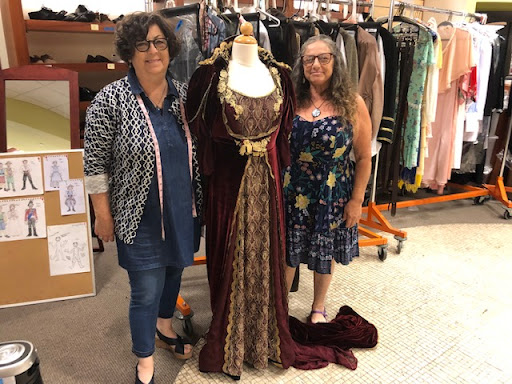 Later, OSB Director of Production and lighting designer, Helena Kuukka, described what a “lightwalker” does – which has nothing to do with Star Wars! Some audience members had already volunteered to help with this task, which involves standing in for principal singers during the exacting process of determining how much lighting is needed and where it should be at any given moment in the opera. 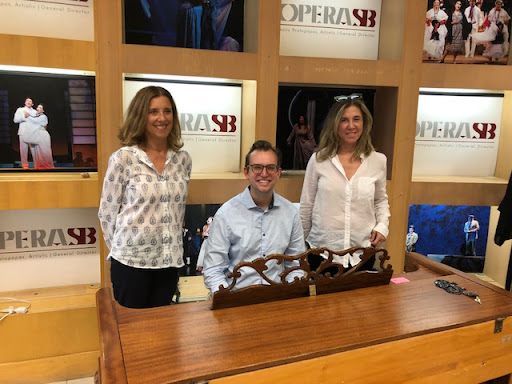 After the presentation, donors Stephanie Ziemer and her sister Dawn were able to hear OSB Principal Pianist Tim Accurso play the opening chords of Tosca on the lovely spinet piano that belonged to their mother. Thanks to their donation, Tim has a space to do private coaching for the cast in the front of the shop. He observed that when he is playing it attracts a lot of attention from passers-by!

OSB Events Manager, Marylove Thralls, wrapped up the show with a heartfelt thanks to the audience for their critical role in supporting the company’s events and performances. She noted, “this Costume Shop tour is just one small way Opera Santa Barbara is showing its appreciation to our dedicated team of volunteers who help make live opera possible.”