Jennifer Lindsay and the Art of Historical Costuming

Jennifer Lindsay’s pursuits in life are as varied as they are remarkable. To let someone know you are an opera singer invites curiosity and fascination. But to also say you hold degrees in Mathematics, Operations Research and Computer Science, perform orchestral violin in numerous ensembles across the US and “picked up” historical costuming originally as a hobby, leaves one feeling astonished and more than a little bit lazy about free-time activities. Lindsay is kind to laugh this off for those less inclined to be productive. But for her, whatever work she dives into whether singing or software development, requires a disciplined approach. Historical costuming was another way to focus her creative outlet of music and add another layer to her profession. Lindsay explains how costuming went from Halloween to historical. Opera Santa Barbara is thrilled to have this “Jen-of-all-trades” as a Chrisman Studio Artist for the 2018/19 season.

I picked up costuming about four years ago, mostly because I missed having a creative outlet that was avocational. For years, music played that role as I pursued a full-time career in the defense industry, first as a programmer and then as a project manager. But after I started treating music as a profession I was forced to approach my craft more rigorously. I realized I could no longer blow off steam by singing along to an entire opera recording at the top of my lungs at 2am, or skip practicing for weeks because I didn’t feel like it. 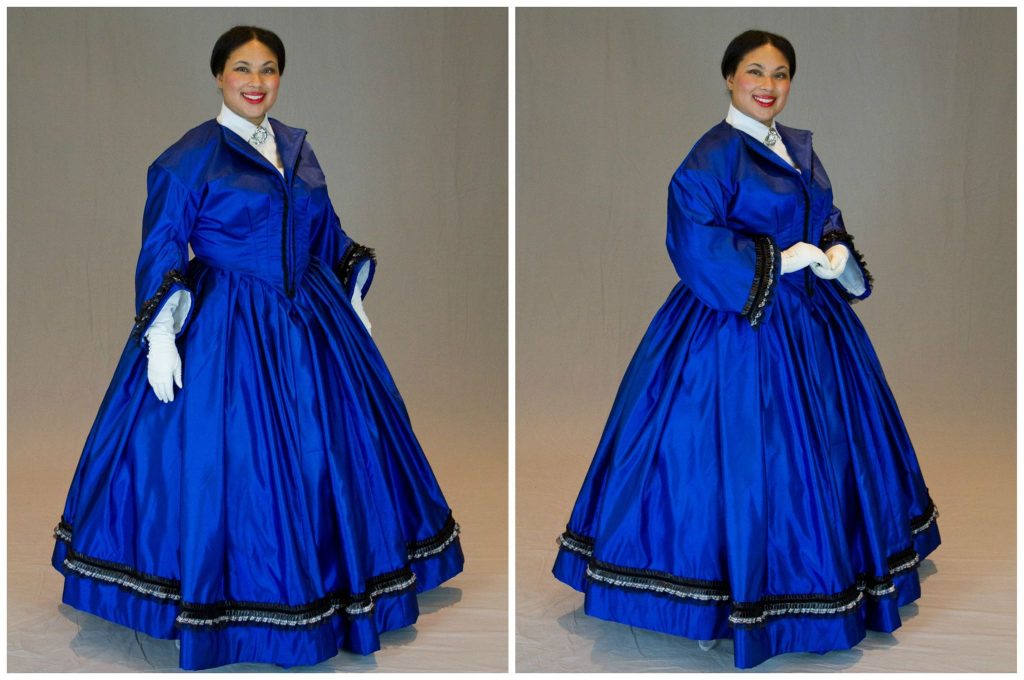 How It All Started

It all started with a Halloween costume. I wanted something that was more elaborate than your average off-the-rack costume, but I also didn’t want to pay through the nose. I’d recently rediscovered my mom’s old Singer machine, which I had used for basic sewing classes as a child, and the thought occurred to me that I could probably throw something together. Two weeks later I had my first costume—a Renaissance Faire-type gown—and I was hooked. Here was a creative outlet that I could pursue with abandon on my own schedule, something that had been sorely missing from my life.

My second costume was an attempt to duplicate a gown from the movie Ever After, and in the process I discovered the sub-discipline of historical costuming. Historical costumers attempt to recreate garments from past eras, with an emphasis on duplicating the shape and style and even sewing techniques used at that time. The outfits they created looked less like off-the-rack Halloween costumes and more like haute couture, and I found myself devouring blog after blog to find out more about this amazing corner of the costuming world. 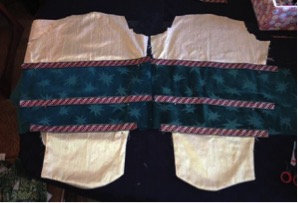 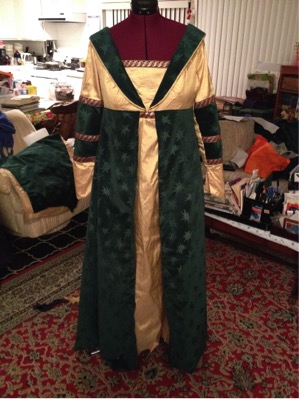 I soon discovered one of the biggest events in the historical costuming world: Costume College. Despite the name, this is not a degree-granting institute of higher learning; rather, it is a four-day annual convention at the end of July that draws historical costumers from all over the world to share their knowledge through a series of classes and workshops, as well as provide an opportunity to wear all of the fabulous costumes they’ve made over the years. Costume College is conveniently held at a hotel in Woodland Hills, within easy driving distance from where I live, so I was determined to go. I’ve attended three out of the last four years (I had to skip one summer when I attended the Bel Canto at Caramoor Festival) and each time I’ve made new friends and picked up more tips and tricks. 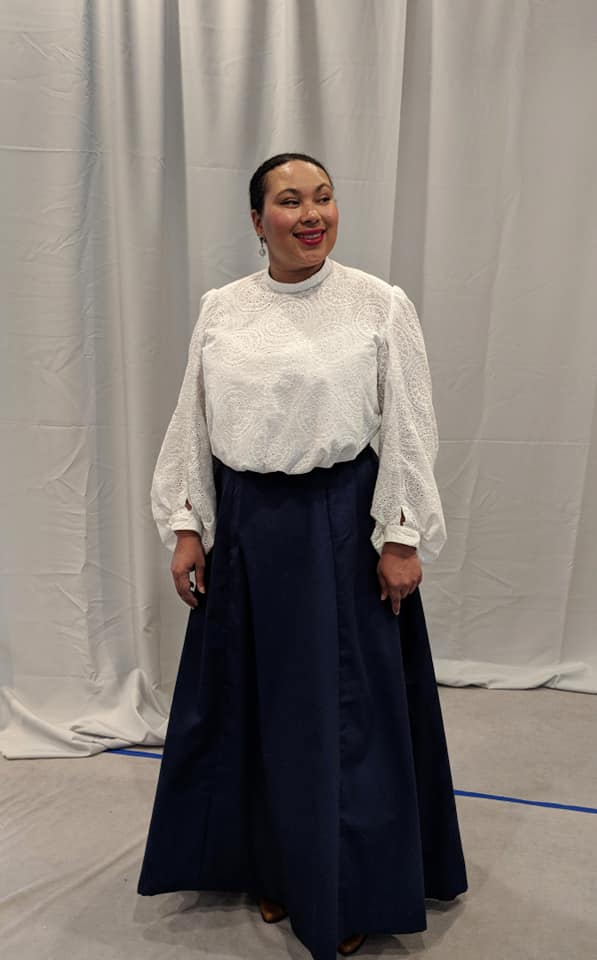 My creative process usually starts by browsing historical costuming blogs and Pinterest boards, where I familiarize myself with different eras and different styles. Along the way I’ve started to recognize the telltale fashion signatures for different periods, such as the off-the-shoulder puff sleeves that were popular during the mid-Romantic era (1830s) and the extra-wide hip supports (called ‘panniers’) that dominated the Georgian period up until the French Revolution. I’ve also learned the importance of the proper undergarments to create the correct silhouette—you can’t get your Civil War skirt to billow out and sway gently side to side as you walk without a crinoline underneath, and your fancy ball gown will not accentuate your waist properly without a well-boned corset underneath.

After sufficient browsing (usually done late at night in bed, because I’m a night owl) something will eventually jump out at me, and then I’ll start to research what patterns are commercially available for that particular style of outfit. I have to stick to commercial patterns because I haven’t yet found the time to learn how to draft my own patterns. 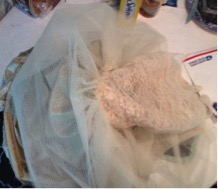 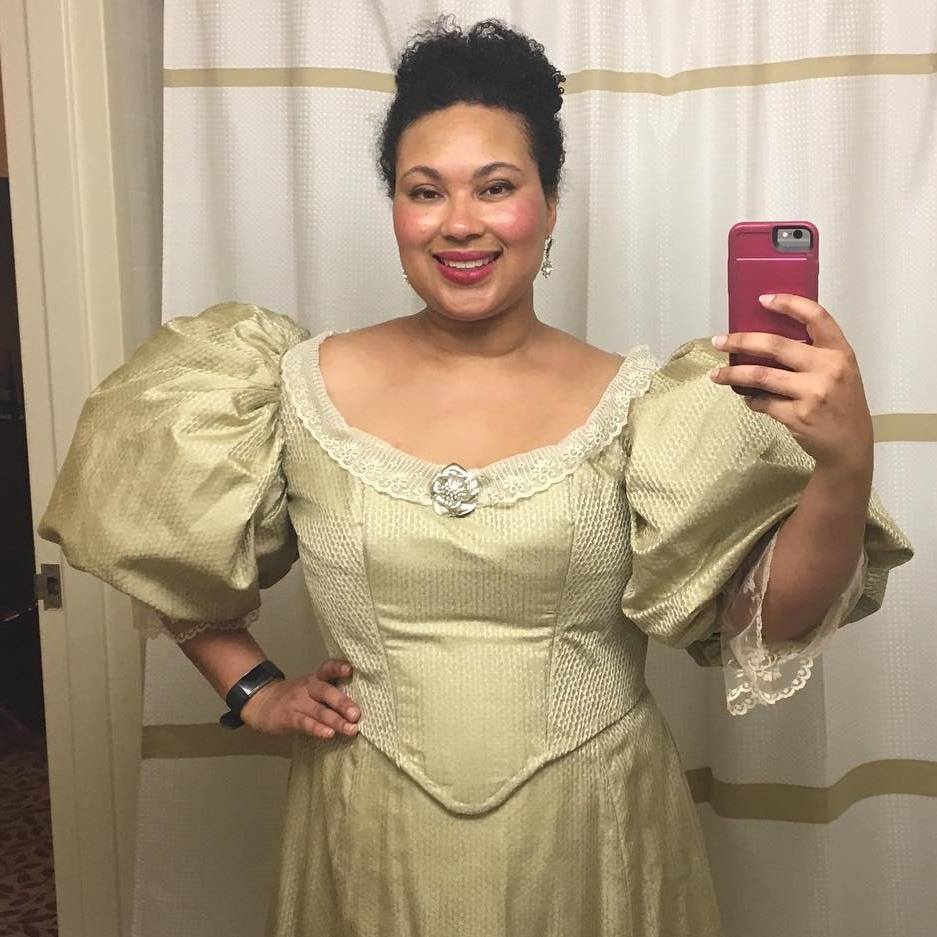 Later modification of original gown to add poufy “Anne of Green Gables” sleeves over the original lace ones. Top photo shows layers of hand-gathered tulle inside the sleeves.

Luckily I belong to several historical costuming groups on Facebook whose members are wonderfully helpful when it comes to choosing a pattern as well as understanding the instructions. Once I’ve settled on the pattern I want I will use those groups as a resource when I get stuck, or if I want to do a modification that deviates from my chosen pattern. I almost always end up deviating from the pattern in some form, either to simplify construction (for my Civil War skirt I used knife pleats instead of cartridge pleats) or to incorporate a modern element (I added an invisible zipper to the side of my yellow 1890s trained gown bodice).

During construction, I often use an adjustable dress form that is set to my approximate measurements to make sure things are fitting properly as the pieces come together, but in the final stages my mom graciously assists with fittings that can really only be done by making small adjustments while I’m actually wearing the garment. There are lots of helpful tips and tricks I’ve picked up over the years that pertain to multiple costuming eras. This includes flatlining (sewing the lining to the outer fabric to stabilize each individual pattern piece before beginning to sew the pieces together) and backstitching (a hand sewing technique that adds extra strength to seams that will receive a lot of stress). 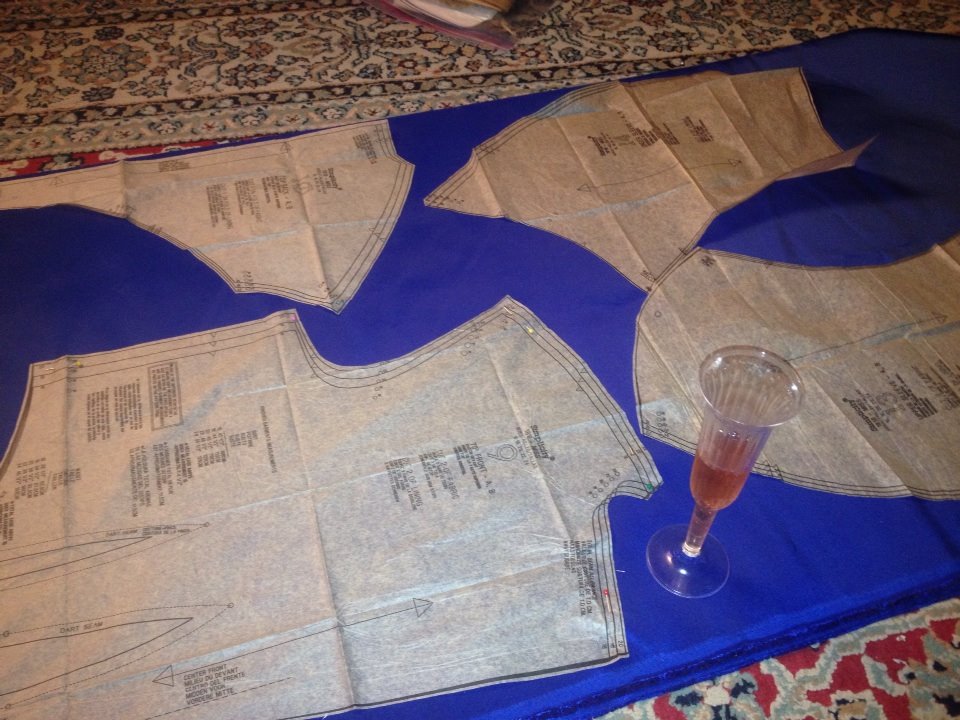 Laying out the pattern pieces for the Civil War day dress (champagne flute recommended but not required). 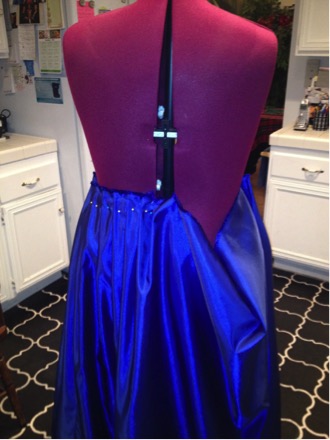 Pinning the knife pleats for the Civil War skirt on my dress form.

It can take me anywhere from a single week to half a year to finish an outfit, depending on how much time I have and also what my current motivational level is. Sometimes I will set something aside for months because I lose interest or become attracted to a different era. The danger of course is that if I wait too long, my measurements have changed when I come back and then I have to rip out my stitches and redo my work (elastic wasn’t used in clothing until the early-to-mid 20th century so it’s a big no-no for most historical eras). Fortunately that has only happened twice: once I lost a significant amount of weight and had to take in all the bodice seams and the waistband of my skirt, and once I gained just enough weight to make a costume uncomfortably tight, in which case I simply gave it to my mom as a thank you for her fitting help over the years.

The Final (and painful) Skills Self Test

Last year, after much deliberation, I decided to attempt hand sewing and 1890s-era gown. Over the course of about four months, working a couple of nights a week, I managed to hand sew the entire thing, which I’ve since named the Sunburst Gown due to the golden yellow hue of the fabric. So far it is the project I am most proud of. There is a lot of planning and patience involved in the crafting of each costume, but there is also a wonderful sense of relaxation and contentment that comes over me when I sit at the sewing machine for hours, pinning and basting, fitting and sewing. 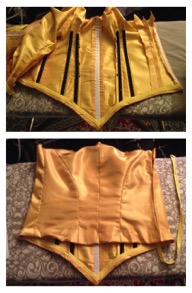 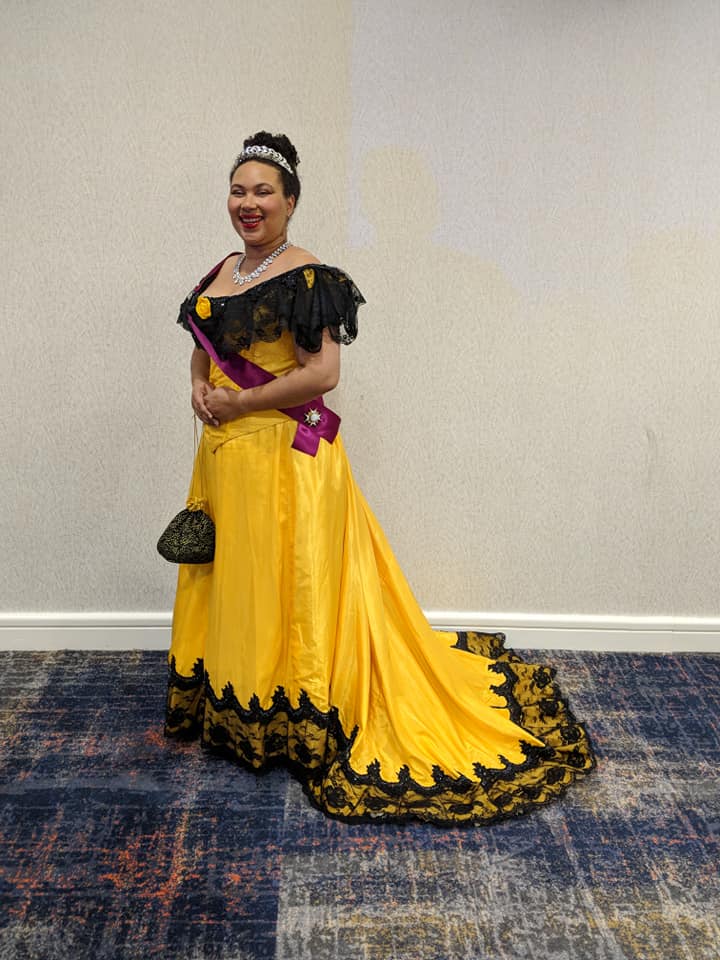 There are also plenty times when I cuss like a drunken sailor—it is not fun to have to rip out and redo three yards of hem stitches because you measured wrong and the skirt ended up being too long—but overall the process is a welcome reminder of the joys of creating for the sake of creating.