Mary Tonetti Dorra, an author and former University of California instructor who has supported numerous area cultural organizations over several decades, has been elected to the Board of Directors for Opera Santa Barbara. Her three-year term began in June. 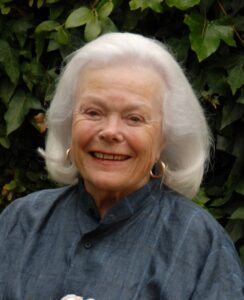 Born in Macon, Georgia, Ms. Dorra grew up in Texas and earned a degree in philosophy at Vassar College.  Following teaching stints in Costa Rica and Uruguay she spent three years in Italy, first studying at the University of Florence and then working as a research reporter in Time Life’s Rome bureau, writing about art, fashion, and film. She went on to serve as an assistant accessories editor at Harper’s Bazaar and as assistant director of fashion publicity and promotion at Revlon, both in New York, and as director of special events at the May Company in Los Angeles before working as a freelance writer for Mattel. After earning a master’s degree in, and teaching Italian at UCLA, she taught at UCSB.

Ms. Dorra has lectured extensively on gardens and travel, and her articles have appeared in such publications as Gourmet Magazine, The New York Times, Elle Decor, the Los Angeles Times, and Travel + Leisure. She has authored three books, Beautiful American Gardens and Beautiful American Rose Gardens, published by Clarkson Potter, and the historical novel Demeter’s Choice: A Portrait of My Grandmother as a Young Artist.

“We are very pleased to welcome Mary Tonetti Dorra,” said OSB Board Governance Committee Chair Joan Rutkowski. “She boasts a unique life story and an impressive record of advocacy on behalf of cultural organizations in our community. Opera Santa Barbara is sure to benefit from her involvement.”

“I’m delighted to have Mary Dorra join the Opera Santa Barbara Board,” said Chair Nancy Golden. “She brings a wealth of fundraising experience, a great deal of energy, and a delightful personality. She’s a terrific addition to our organization.”