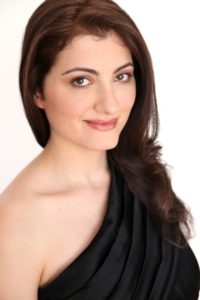 Breaking News: Opera Santa Barbara is pleased to welcome Valentina Fleer as the soprano soloist for Tuesday’s Gala, “An Affair to Remember.” The Russian-American soprano has been drawing continuous attention for her “golden voice,” praised for its “shimmering clarity” and “sweetness and power.” This May she will sing Musetta in La bohème at the Los Angeles Opera, where she debuted last year as Barbarina in The Marriage of Figaro, conducted by Plácido Domingo.

Originally from Moscow, Valentina grew up in New York City, where she studied at Columbia University and the Manhattan School of Music. She has participated in prestigious artist development programs including San Francisco Opera’s Merola Opera Program, where she sang Adina in The Elixir of Love; Glimmerglass Opera’s Young American Artists Program; and the Los Angeles Opera’s Domingo-Thorton Young Artist Program, where she is currently in her second year.

Recent engagements include Fiordiligi in Così fan tutte with Lake George Opera, and concert engagements at Carnegie Hall and the Detroit Symphony Orchestra. Later this season, Valentina will tour with the Munich Symphony Orchestra as the soprano soloist for Mozart’s Requiem. In her burgeoning career, she has had the privilege of working with industry greats including Plácido Domingo, James Conlon, William Bolcom, Warren Jones, and Sir Jonathan Miller.  Valentina has been awarded by the prestigious Richard Tucker Music Foundation and Metropolitan Opera National Council Auditions.

[Valentina Fleer replaces the previously announced Micaëla Oeste, who has withdrawn due to illness.]