Spotlight on: “The Consul”

“To criticize a theater piece as too theatrical is as senseless as to criticize a piece of music for being too musical…. Modern dramatists are much too timid about ‘theater,’ and such timidity is fatal to an opera composer, for music intensifies feeling so quickly that, unless a situation is symbolically strong enough to bear this intensity, it becomes ludicrous by contrast.” 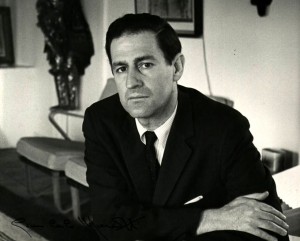 Gian Carlo Menotti is a central figure in twentieth-century opera. His 25 operas, which include The Old Maid and the Thief, The Medium, The Consul, The Saint of Bleeker Street, and Amahl and the Night Visitors, have been performed all over the world, and not only in the traditional opera house. Menotti’s shows have been successful on Broadway, and he was one of the first composers to create operas intentionally for new twentieth-century media such as radio and television. Even today, seven years after his death, the arts festivals Menotti founded, in both Spoleto, Italy, and Spoleto, South Carolina, present important contemporary performers, artists, and speakers.

Menotti was born in 1911, in a mountainous village in northern Italy. He was sixth of eight children in a well-to-do family, and a bit of a child prodigy: he composed his first opera, The Death of Pierrot—like all his operas to his own libretto—at age 11. To encourage his gift, his mother moved the family to nearby Milan, the opera capital of Italy, and enrolled her teenage son at the Milan Conservatory. She also found ways of introducing him to Umberto Giordano, composer of the popular opera Andrea Chenier, and the important conductor Arturo Toscanini. When her husband died, Menotti’s mother moved to Colombia to oversee the family’s coffee business, and, on Toscanini’s advice, sent her son to the recently established Curtis School of Music in Philadelphia, PA.

Menotti had never been away from his family and spoke no English. He was lucky to become fast friends at Curtis with another composition student, Samuel Barber. Menotti was invited to spend holidays with Barber’s family, who lived nearby. Barber’s aunt was one of America’s leading opera singers, and his straight-laced American Protestant family were in many ways the opposite of Menotti’s big, rambunctious Italian Catholic family. When both young men had graduated from Curtis, they embarked on a tour around Europe, partly with prize money Barber had received for a composition. They became a couple and, some years later, set up house in Mt. Kisco, about an hour outside New York City. A young poet named Robert Horan became a third member of the household. Barber and Menotti found him one night on a snowy street in Manhattan; the composers were coming from a performance at the Metropolitan Opera, the penniless poet from Grand Central Station, where he had been sleeping for the past three nights after hitchhiking to New York from California with his girlfriend, Pauline Kael (later to become the important film critic).

In the days when the Menotti-Barber-Horan house in Mt. Kisco was a weekend destination for New York City’s leading artists and intellectuals, Menotti’s star was rising as a creative artist. The Metropolitan Opera staged a brief comic opera of his and commissioned another; he wrote The Old Maid and the Thief for the NBC Radio Network (premiered on the air in 1939, and since produced hundreds of times onstage); and a couple of daring young Broadway producers organized a Menotti double-bill, The Medium, a gripping tragedy, followed by The Telephone, a comedy. The Consul premiered on Broadway (preceded by the traditional out-of-town tryout in Philadelphia) in 1950; its harrowing, ripped-from-the-headlines story and supremely theatrical blend of music and text won Menotti the Pulitzer Prize for Music and the New York Drama Critics’ Circle Award for Best Musical Play. It ran for 269 performances on Broadway and, within a year, was being produced in Milan, London, Paris, Berlin, Zurich, and Vienna. Menotti’s biggest audience was that for Amahl and the Night Visitors, a one-act, family-friendly Christmas-themed opera, originally broadcast on television on December 24, 1951. By the 1970s, Amahl was the most frequently performed opera in the United States, beating out La bohème and The Marriage of Figaro and inventing that television genre in which a miracle solves the problems of a poor, deserving child at Christmastime.

The same conscience that inspired The Consul also drove Menotti to create the Spoleto Festival, first in Italy in 1958, then in South Carolina 20 years later. “The Festival satisfied a very selfish need,” Menotti told his biographer. “I became so completely disenchanted with the role of the artist in contemporary society. I felt useless. Art had become what Sam Barber calls ‘the after-dinner mint of the rich.’ I felt that the artist should become part of society—a needed member of society rather than just an ornament. That’s why I started Spoleto.”

Though more popular in his day than any other twentieth-century composer of operas, Menotti was never the darling of the critics or the musical intelligensia. But despite the controversy his name has always provoked, his legacy lives on in a handful of his operas and in the festivals he created.

Origins of The Consul 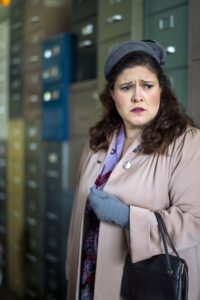 Gian Carlo Menotti invented the stories, wrote the libretti, composed the music, and stage directed all of his operas. He often generated stories out of characters and situations from his own life. For example, Menotti based Amahl on his own experience as a child when his injured leg returned to health after what appeared to be divine intervention. With The Consul, however, Menotti was writing less about himself and more about current events.

During World War II, a group of 25 Austrian refugees fled into Hungary. But because they didn’t have passports they were trapped for a week on a bridge between the two countries: neither Austria nor Hungary would admit them. Menotti, who was courted shortly after the war by Hollywood, wrote a script on this story for MGM. But the subject was deemed too depressing for the American movie-goer, and Menotti and Hollywood parted ways.

Shortly thereafter, the composer read another news item in the New York Times:

“IMMIGRANT A SUICIDE. WOMAN DENIED ENTRY TO U.S. HANGS HERSELF ON ELLIS ISLAND. Mrs. Sofia Feldy, a 38-year-old Polish immigrant, who was refused admission to the United States by a board of special inquiry at Ellis Island, Feb. 6, committed suicide by hanging at the Ellis Island detention room, the Immigrant and Naturalization Service announced yesterday. Mrs. Feldy was denied admission to the country, after her husband, Antoni Feldy of Chicago, testified that he had divorced her in November, 1940, on grounds of desertion. Mrs. Feldy, who came here January 19 with her daughter, declared she had received no notice of the divorce that her husband claimed he sent to her in Poland. Mr. Feldy agreed to accept his daughter, who was admitted on that basis, but his former wife was excluded by a vote of the board.”

Menotti changed the details, but dramatized the despair of the immigrant who has risked and lost everything. He also created for The Consul the small role of Anna Gomez, inspired by a young woman Menotti had seen in an Italian hotel room, who kept interrupting her own conversation with her father with intermittent shouts of ‘No’ as she nervously ran her hand through long dark hair with a white streak. And as for the old Italian peasant woman, Menotti met her on a plane from Italy to New York: “She was tiny, like some shriveled child, and her wrinkled skin, the heritage of peasant ancestors, was the color of earth…. Her papers were not in order and no one could understand her naïve explanations that she murmured in her strange accent. I did all I could to assist her but was finally obliged to leave her to the authorities.”

“Hitchcock with Recitatives”: The Music of The Consul 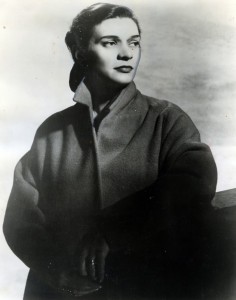 New York City was a nine-newspaper town in 1950, and all of them raved about The Consul. Olin Downes of the New York Times led the pack, calling the new work “an opera of eloquence, momentousness, and intensity of expression…this opera is written from the heart, with a blazing sincerity and a passion of human understanding. It is as contemporary as the cold war, surrealism, television, and the atom bomb. It is torn out of the life of the present-day world, and poses an issue that mercilessly confronts humanity today. And this is done with a new wedding of the English language with music in a way which is singable, intensely dramatic and poetic by turns, and always of beauty.”

The great stumbling block for American opera composers has always been getting that wedding to work, that marriage between words and music. Like the perfect vinaigrette, it easily falls out of balance if these partners fail to achieve the right proportions. Menotti has structured his opera so that scenes of nerve-wracking tension, which rely more on orchestra, words, and acting, alternate with passages of lyrical effusion, in which the voices get to soar. In each scene, the drama tightens the screws until we can’t bear any more—at which point the characters’ emotions escape in song: in the trio “Now, o lips, say goodbye,” the quintet “In endless waiting rooms,” or the lullaby “I shall find for you shells and stars.”

Unlike the other characters, the Secret Police Agent and the Secretary seem incapable of expressing their inner selves lyrically. The Secretary, who seems to have no human emotions left, instead uses an irritatingly cheery waltz as her motif, plus the incessant sound of her typewriter. As for the auxiliary characters, they give Menotti the opportunity to keep varying the opera’s tone: he writes a pastiche of Puccini at his most emotional for his old Italian woman (the impact of her music undercut, however, by Mr. Kofner, who translates her words but not her emotions) and a chipper yet eerie patter song for the strange humbug magician, Nika Magadoff.

Menotti composed The Consul for a small orchestra by the standards of grand opera, one that prominently features the dry, brittle sound of the piano. Yet the orchestral interludes linking the scenes feature powerful music, such as the death march for Magda’s baby, which continue to tell the story and explore its powerful emotions. The greatest aria in The Consul is without doubt “To this we’ve come” (also known as “Papers!”), Magda’s breakdown before the Secretary at the end of the second act. At its conclusion, the soprano must ride the waves of a huge, almost Wagnerian orchestral sound; the orchestra plays a soaring melody as Magda cries out the words: “The day will come, I know, when our hearts aflame will burn your paper chains! Warn the Consul, Secretary, warn him: that day neither ink nor seal shall cage our souls. That day will come, that day will come.”