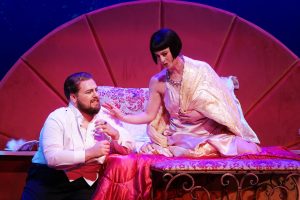 Opera Santa Barbara was again in fine form when it presented Handel’s Semele at the Lobero, which was first performed in 1744 at London’s Covent Garden.

A fusion of elements of opera, drama, and oratorio, the popular work is taken from Ovid’s Metamorphoses with Semele, the mother of the god Bacchus, superbly played by soprano Jana McIntyre, with tenor Robert Stahley as Jupiter, mezzo-soprano Sarah Coit as Juna, and countertenor Logan Tanner as Athamas, the last three in their OSB debuts.

To read the full review in the Montecito Journal click here!