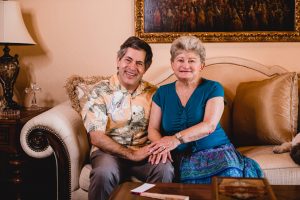 A Remembrance by David Reichert

For eleven years I had the privilege of being Diane’s loving partner. After four years, we married, and this past April 11 would have been our seventh anniversary. As she was hospitalized, I told her she HAD to get better so we could celebrate! Alas, such didn’t happen.

La Traviata is both the opening note and the coda for us. We met at Opera Santa Barbara’s opening dinner before the March 4, 2011 performance of La Traviata. This season’s closing performance came as we are in the process of saying goodbye to Diane and adjusting to a smaller world without her earthly presence.

Diane was first exposed to opera in a music appreciation class at Pasadena City College where she studied before transferring to UCSB. La Traviata was her first Opera Santa Barbara experience, beginning a new cultural love. She leaves a broad philanthropic legacy in our town. Along with having been a key contributor to this company, Diane supported the Choral Society, CAMA and the Natural History Museum, among others. The Santa Barbara Rescue Mission was her favorite human services charity, and she became a Gaucho for the ages. Along with having given significantly, at the time of her passing Diane served on the UCSB Alumni Board. Every so often in Heaven, I think she switches out her halo for a golden Gaucho hat!