Opera SB Patron Services Associate Malena Jones sat down with Maestro Francesco Milioto to talk about Falstaff, which he calls “a complete joy ride from the beginning to the end… be ready for high-paced music, fun, scheming…”

Malena Jones (MJ): Falstaff is such an ensemble piece, and you’re responsible not only for the singers, but also for the orchestra! How do you keep it all together? 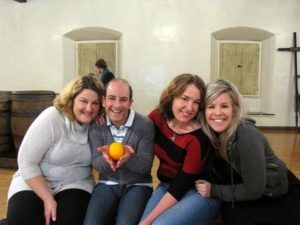 Francesco Milioto (FM): Good communication, and good physical communication with my arms, eyes, and face, and my body language. Some people say it’s good baton technique, but it has to go beyond that. You have to physically engage more than everyone’s sense of sight. You have to be able to make them feel something and want to do something, and want to play a certain way at a certain time. It’s a matter of being physically more musical than just your right arm or your left arm, and keeping your eyes up, looking at the singers, and being ahead with your communication – with both the stage and the pit, and quickly using your eyes and your ears to adjust anything that might be going astray – or about to go astray. It helps to not only keep my brain a little bit ahead of the music, but also to see things and understand and anticipate things, and be as helpful as I can. I try to be a combination of physically showing the music, and staying in and out of people’s way as they need me. I don’t try to impose myself on them, but I try to create and be as organically in the situation as I can.

MJ: Are there any motivic elements that mirror the characters in Falstaff? For example, is there a theme we might hear when Falstaff enters the room, or when Nannetta and Fenton are together?

FM: There aren’t any leitmotifs for specific people, but you do have, with Nannetta and Fenton, the little tag that they sing at the ends of the duets, which happens again in the third act, and with Quickly’s “reverenza”. With Falstaff I think you have a type of music that happens in each of the situations. There’s a robustness to his music that shows his character, and what he wants and needs to do. It’s more about situational music, being careful with the setting of the text and creating the atmosphere.

MJ: What do you think makes this piece distinctly Verdian?

FM: Wow. That is a huge question, because Verdi didn’t write a lot of comedies, and this piece came many many years after a lot of the things that we know – and 5 or 6 years after Otello, so what makes this piece distinctly Verdi – there are so many new things in it that Verdi does. This piece is at a completely different level of combining music and word. You almost don’t notice that the music it there, because there are little arias for Fenton, and a little one for Nannetta as the nymph (that also has chorus and some other action), but it’s not a spot-on “aria.” There are no other spots in the opera that actually stop. It goes beyond what he used to do, and what I would say that’s similar about it is that he uses a lot of the same musical language. He uses the same rhythmical language. It’s not like it’s not recognizably Verdi anymore, it’s just Verdi on a higher level in the more subtle things, like structure and combinations of tempi, and trying to keep the same inner-rhythmic pulse. I think he goes beyond the music and into the audiences’ memory of which tempos and beats and feelings work. This is similar to the way Shakespearian actors do work. They memorize things using rhythms, and the certain flow of the way the lines need to go – Verdi really bonded that together with the music that he created for this score, and to me it simply is one of the greatest pieces. It works from beginning to end, and not only has a complete structure, but also an inside structure that goes beyond words and music to convey physical beats that you understand, that are also associated with the characters and that translate into other situations seamlessly. This is a new and completely fantastic ending of an operatic career.

MJ: That sort of goes along with my next question, which is – are there any references to Verdi’s previous works, such as Otello?

FM: I think that the closest thing to this piece is definitely Otello. The use of grace notes, trilling, the use of music that we might know associated with Iago, and associated with some jealousy that obviously has importance here, but I think the closest opera to Falstaff would be Otello. In Otello you have arias, duets, and it’s more in the standard style of Verdi, but in this piece it’s incredible how he translates the music that you would associate with a type of character or a type of situation into this comical situation…it gives you a turnaround in your ear, and your eye when you combine the two things, and that for me is probably the most important thing.

MJ: What should we listen for with this opera?

FM: You should listen to the words and the situation, and you should treat this opera like a play. You should come ready to use your eyes as much as your ears, because there’s not really a time for you to stop and enjoy what’s going to happen next. Come and treat this like a musical play, or a hybrid of something that you’d see at straight theater, compared to a musical, compared to an opera. It’s not the type of piece where you’re going to stop for applause or an encore. It’s a complete joy ride from the beginning to the end, and you have to be ready for high-paced music, fun, scheming, and use your eyes and ears to figure it out, and enjoy it as it happens. Let it roll with you to the end!

MJ: What can you tell us about the fugue at the end?

FM: The fugue at the end is probably one of the hardest things in operatic ensemble writing that I’ve come across in my career. There are a few spots in Mozart where you get some larger ensembles, but this is a nod to the likes of Bach, and Verdi does it brilliantly here. It’s really one of the most complicated places for the vocal ensemble – it’s not as difficult for the orchestra. Trying to balance all of the voices and trying to make it sound like a fugue so that you create the sound you would have if you had someone at the piano, or an orchestral fugue. You want to hear every entrance clearly; you want to hear every theme. You want to hear all of the variations of the themes, and you want to hear the layering of what the composer does with fragments of the theme, parts of the theme, rhythms of the theme, words of the theme. Verdi uses everything, and turns it upside-down and backwards. It’s difficult, after having been singing for an hour and 50 minutes of singing to end on a fugue! It’s hard to build up the energy, focus, and intensity to do that. For me it’s a matter of a different kind of focus at the end, and I’m such a pianist and instrumentalist that I really do insist on the singers using the dynamics that help us create what we need to actually make it a vocal fugue, and that’s what crazy and important about it.

MJ: Thank you very much for your insights – it’s made me so much more excited to see (and hear) this opera again!