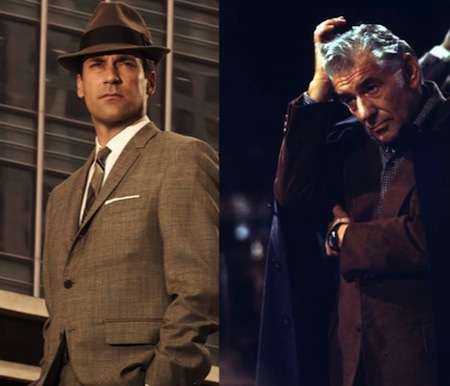 Today’s clip is Sam’s aria “There’s a law”. A prototypical alpha-male, he gives his worldview on the natural selection amongst men – “There are men who can make it, and men who cannot.” Some men are born winners, and those that aren’t will never measure up – no matter how hard they try.

Also, an interesting link to a 2010 review of Bernstein’s “A Quiet Place”, the 1983 “sequel” to “Trouble in Tahiti”, it checks in on the characters decades later, but fully integrates Tahiti’s music in flashback scenes to the character’s youth.

Fifties Broadway rattles through the Tahiti parts like distorted scraps heard in a dream… As a stand-alone show, Trouble in Tahiti was no light domestic parody. The title comes from a rickety musical that Dinah pans in the hilariously caustic showstopper “What a Movie,” during a wry, tuneful screed against suburban affluence, showbiz clichés, toxic parenting, hollow marriages, and corporate gladiatorial combat. If Bernstein’s attack on American domestic complacency seemed out of step… it feels timelier today, when we treat dysfunction as a form of entertainment. We know Sam and Dinah: They are Don and Betty in Mad Men, Frank and April in Revolutionary Road—the Adam and Eve of suburban conjugal misery.