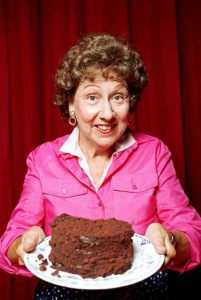 To launch its 20th Anniversary Season, Opera Santa Barbara is presenting a special performance of Lee Hoiby’s comic one-act opera Bon Appétit! on Monday, September 30 at noon at the Center Stage Theatre. This delicious opera is a comedic take on a classic episode of Child’s popular television show – set to music! The incomparable mezzo-soprano Susan Nicely stars as the flamboyant master chef, teaching the makings of a classic French chocolate cake – Le Gâteau au Chocolat L’Éminence Brune. This performance is under one hour long, designed to fit into any lunch break. And, after the performance, audiences will enjoy a slice of chocolate cake courtesy of Whole Foods.

With his short opera Bon Appétit!, American composer Lee Hoiby (1926-2011) took on the making of a chocolate cake, as told through the actual words of celebrity chef Julia Child, who spent the later part of her life living at Casa Dorinda in Santa Barbara. Hoiby composed Bon Appétit! In 1985 for American actress and friend Jean Stapleton (best knows as Edith Bunker in All in the Family – pictured above), who sang the 1989 premiere at the Kennedy Center and later performed it in an off-Broadway run. The libretto for Bon Appétit! Was adapted by Hoiby’s frequent collaborator and partner Mark Shulgasser from transcripts of two episodes of Child’s TV show, The French Chef.  The overwhelming popularity of Child (1912-2004) came not just from her culinary expertise but from her self-deprecating humor and matter-of-fact style. Hoiby wisely left most of the gags for the staging and wrote a tuneful but straight-ahead vocal line. Like Child’s whipped egg whites, Bon Appétit! may be light and frothy, but it’s the result of a master’s sure touch.

Tickets are $13 per person and can be purchased by calling the Center Stage Theater at 805.963.0408 or www.centerstagetheater.org.