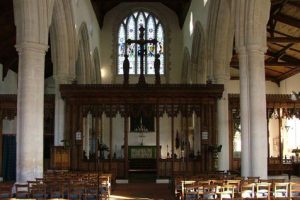 When Benjamin Britten was a young boy in Suffolk in the 1920’s, his musical talents were so evident that his mother was confident that when he grew up he would become the fourth B… after Bach, Beethoven and Brahms. Ben didn’t quite make it but any reckoning of the greatest composers born in the 20th century would include him… along with composers like Stravinsky, Shostakovitch, and Prokofiev. Three Russians and a Brit!

In England he was a great hero, for no one since Purcell in the 17th century was so successful in writing opera in the English language. His opera Peter Grimes quickly became part of the international music repertory along with Billy Budd and Albert Herring. His symphonic “A Young Person’s Guide to the Orchestra,” a set of variations on an aria by Purcell, is heard all over the world.

Britten also was a master of more intimate music, in particular chamber operas, which were written for small orchestras in smaller venues. Noye’s Fludde (or “Noah’s Flood”) was written for the local church in the Suffolk town of Orford and involved the participation of the local children and congregation with only two professional singers. It was first performed in 1958 as part of the Aldeburgh Music Festival.

Britten’s popularity is quite remarkable as he was a member of two outcast groups of the mid 20th century since he was both a pacifist and a homosexual. When he left England in 1939 with tenor Peter Pears (with whom he had a lifelong relationship) to spent three years in America he was subjected to a good amount of criticism by his compatriots. It is not surprising that many of his operas are about outcast men. Noah is clearly an exception.

But after he returned in 1942, he overcame it all and was even commissioned to write an opera (Gloriana) to celebrate the coronation of Queen Elizabeth II in 1952. Britten was plagued by many health problems and died in 1976 at the age of 63. He had made it clear that he did not want to be buried in Westminster Abbey because it meant being separated from Peter Pears. They were ultimately interred together in St. Peter and St. Paul Churchyard in Suffolk not far from where he grew up and just 10 miles from the church in Orford where Noah’s Flood premiered.